Bats are so smart! 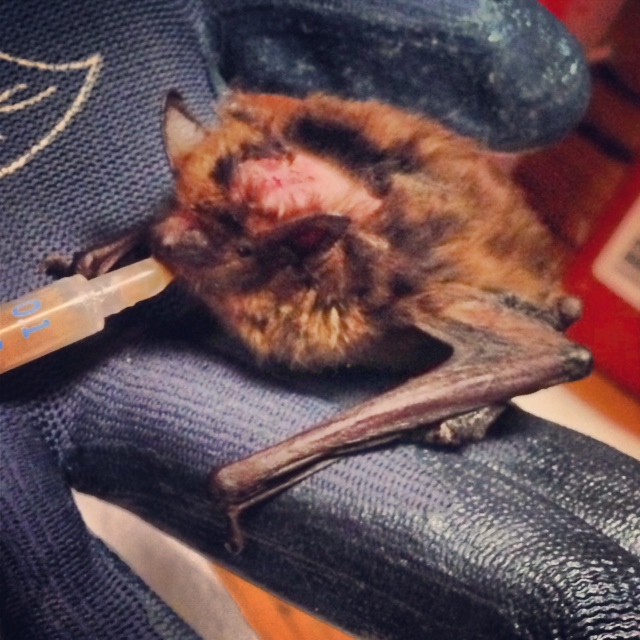 We were given a little brown bat last Saturday that was found in someone’s basement. I was hoping that it had just found  a snuggly spot to enter torpor for the winter. (Simply put, torpor is an “light-hibernation”.) Upon intake, I discovered some wounds on him: open fractures, a complete missing part of a bone, and some membrane (wing) tears. He also had an abrasion on his head with some fur missing. We started him on antibiotics and fluids. I trimmed the protruding bones back as best I could without anesthetics and tried to feed him a “mealworm shake”. He really had no interest in eating this food. He did try to fly away a couple of times and he did verbalize his displeasure in what we were doing. That sound reminds me of an electric “zzz zzz zzz”. Enough for one night…we let him rest and took him to one of the wonderful vets that works with us. She completed the bone clipping and membrane trimming as needed. His little head was shaved as well, so I could apply some antibiotics directly to the skin.

It has been a week since he came to us. He is doing much better and even has a name now: Edward.  We had to give him a name as he will not have strong enough flight for survival in the wild. Edward will become  a part of our important education team. He will eventually be placed with another little brown bat named Bella. We are still in transition with the eating of meal worms. I did discover that mixing them with a yummy flavored pedialyte helped. (He needed those fluids, anyway). He seems to understand now, that when I remove him from clinging on the mesh crate, it is okay…he will be fed and placed back safely. He actually gobbled up his meal worm shake and ate twice as much as he ate the prior night. It will be a great day when he finally understands to eat the whole worms on his own. He’ll get to that point eventually, just as Bella did. They do need to be trained that this will now be their diet. Bats are so smart that they do learn to recognize their caregivers and the changes in living conditions. Rehabbers have to respect their bat patients and be in tuned to what they tell us, and in return we’ll be rewarded trust from the bat. I did forget to prepare his antibiotic injection before getting him out last night, so while I turned to do that, he did try to “run away”. He wedged himself in a tight spot right behind the stove. Easy rescue…I just moved the stove out. I gave him his medicine and then with his full belly, he fell asleep on my hand.  I think this is a start to earning some trust. 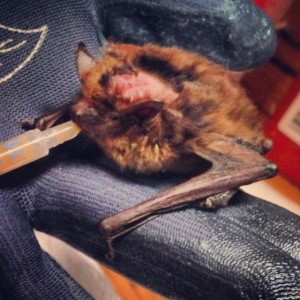