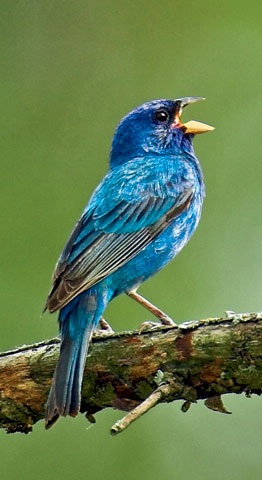 Exhausted at the end of a 1,200-mile journey from South America, a male indigo bunting descends slowly toward what looks like an inviting tree in a lush backyard. Then, thwack! He hits a window that’s reflecting a tree instead.

Temporarily stunned, the bunting flutters to a shrub to recover. Fortunately, he wasn’t going fast enough for a fatal collision, and after a few hours he’s well enough to begin looking for food and a mate. But studies have shown that every year up to a billion birds die after colliding with windows on low-level structures in the United States.

“Birds don’t perceive glass as a barrier,” says Anne Lewis, president of City Wildlife in Washington D.C. “Either it reflects trees they think they can fly into, or it’s transparent and they try to fly through it.”

If you’ve never heard a bird thud, it’s likely you just weren’t home when it happened, and the bird was scavenged or flew off to die of a brain hemorrhage or starved after breaking a beak.

So how can people who want birds in their backyards keep them from crashing into windows?

“First of all, the location of your bird feeders is important,” says Lewis. “If you have a feeder in your yard, it should either be right up against a window, or more than 30 feet away.” A startled bird may fly into a window right next to a feeder, but it won’t gather enough speed to hurt itself.

Also analyze your windows. In most homes, windows change in transparency throughout the day. Remember that birds are most active in the morning and evening hours. For mostly transparent windows, simply keeping the blinds or drapes closed can help. It’s also a good excuse to let your windows get a little grimy—the less reflective they are, the more birds will recognize it as an object.

With really reflective windows try applying something to the outside of the window to ensure birds recognize it as a barrier. The rule of thumb is to have no more than a four-inch interval between clear glass. Depending on the situation, try window decals, hanging pieces of string or drawing on windows with soap or Tempera paint. It’s a fun activity for kids, and the paint is nontoxic and long-lasting even in the rain but comes off with a damp rag or sponge.

Get creative and you could be saving dozens of birds’ lives each year. Keeping cats indoors and replacing weed killers and pesticides with organic alternatives helps even more.

With just a few changes, you can create a safe haven for birds so they can live to fly another day.