Wildlife/pet interactions create problems for everyone. It’s far easier to manage the movement and behavior of pets than those of wild animals. Supervising pets and not allowing them to roam freely are the most effective ways to prevent pet/wildlife conflicts.

We’ve enjoyed a special bond with cats since domesticating them some 4000 years ago. Cats arrived in North America with the colonists, and since then, their numbers have swelled. Census figures showed 60 million owned cats in the U.S. in 1990, up from 30 million in 1970. If you think your cat doesn’t hunt, you are wrong, it is their instinct. 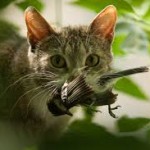 Cats are non-native predators, and every year, free-roaming cats kill and orphan millions of birds and small mammals. Cat predation hurts many species of native birds, as well as the native predators that depend on them for food. Keeping pet cats indoors is clearly the right thing to do for wildlife.

Keeping cats indoors is also best for cats! Indoor cats live far longer, healthier lives than cats who are allowed to roam (17 years vs. less than 5 years, on average). Indoor cats are sheltered from the many dangers that shorten the lives of outdoor cats–cars, getting lost, parasites and diseases, as well as human and wildlife predators.

Check out the links below for tips on how to transition your cat to a happy, healthy indoor cat.

If your cat has caught an animal, bring the animal to a wildlife rehabilitator as soon as possible. Even if you do not see an injury, there are likely tiny puncture wounds from your cat’s teeth, and bacteria from your cat’s mouth will kill the animal in a day or two if it does not receive treatment.

If you are not willing or able to transition your cat into an indoor cat, please consider purchasing a collar with bells. It reduces the number of birds and other small animals that your cat can catch and hurt.

DOGS
Whether she’s a pitbull or a poodle, your dog still has many of her wolf ancestors’ hard-wired predatory instincts. We often see adult squirrels, fawns, and other larger mammals that have been injured by dogs. 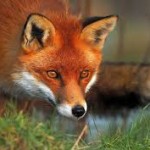 DANGERS TO PETS
Sometimes pets become the prey. Predatory species such as foxes, owls, coyotes, and bobcats, or omnivores such as raccoons and bears may kill cats, rabbits, small dogs, and other pets who are allowed to roam. It is devastating to lose a pet, and this often leads to the killing of the suspected wild animal. So, when unsupervised pets are allowed to roam, both the pet and the wild animal may lose in the end.

HABITUATION
Wild animals may be drawn into close proximity to humans when they eat pet food that has been left outside , or when they begin to prey on pets. Such animals may lose their normal fear of humans. Several problems can arise when wild animals begin to associate humans with easily acquired food. Read more about the side-effects of feeding wildlife. 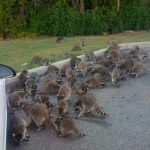 In the case of large predators or large omnivores like bears, foxes, and coyotes, habituation may lead to human safety issues that will result in the animal being removed or destroyed. In the case of smaller animals, habituation may create “nuisance” animals. While one landowner may enjoy watching raccoons eating from the cat’s dish on the porch, his neighbors may not be as tolerant. Again, the end result is often the removal and killing of the animal.

WHAT CAN YOU DO?
•Turn your cat into an indoor cat or build an enclosure so your cat can be outside safely

•When outside of a fenced yard or dog park, keep your dogs leashed

•Feed pets inside, or if feeding outside, remove leftover food as soon as the pet has finished
eating

•Make sure that all outdoor caging for animals such as rabbits, chickens, and other pets is secure against predators. We recommend hardware cloth.