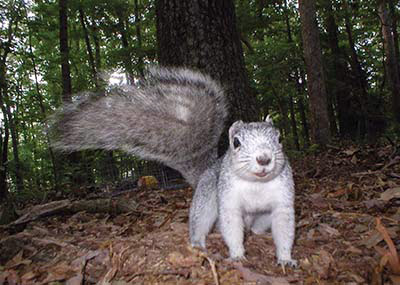 The endangered Delmarva fox squirrel is faring better today than it has been in half a century, thanks to national wildlife refuges along the Eastern seaboard.

Chincoteague National Wildlife Refuge has been particularly instrumental in the squirrel’s revival.

“Delmarva fox squirrels were not at Chincoteague when the species was first listed” under the old Endangered Species Preservation Act in 1967, says Kevin Holcomb, a wildlife biologist at the Virginia refuge.

The endangered Delmarva fox squirrel is larger than the common gray squirrel and has a full, fluffy tail. (Photo: USFWS)

The squirrel’s historical range stretched from central New Jersey south through eastern Pennsylvania and down the Delmarva Peninsula, so named because it includes parts of Delaware, Maryland and Virginia between the Chesapeake Bay and the Atlantic Ocean.

But by 1967, largely because of forest clearing for agriculture, short-rotation timber harvests and over-hunting, the squirrel’s distribution had decreased to 10 percent of that range.

To reduce the risk of range-wide extinction and increase species distribution, from 1968 to 1971 biologists translocated Delmarva fox squirrels to Chincoteague Refuge, starting a new population in its loblolly pine forest. A total of 34 squirrels from Blackwater and Eastern Neck Refuges in Maryland were relocated to Chincoteague Refuge. Common gray squirrels were trapped and removed to reduce species competition.

The Delmarva fox squirrel is larger than the common squirrel.

It can be 28 inches long and weigh three pounds. It has a silvery gray body, white belly and full, fluffy tail. It feeds primarily on nuts, seeds and acorns from gum, oak, pine, maple, walnut and hickory trees.It is born in litters of one to six and can live for six years. Rather than jump from tree to tree, as common squirrels often do, Delmarva fox squirrels typically descend a tree and travel on the ground to the next tree. Their preferred habitat is mature mixed hardwood and pine forest, which provides abundant food, cavities for dens and protection from predators.

Over the past four decades, Chincoteague Refuge has helped increase the squirrel’s numbers. It manages forest habitat to maintain open understory, increase hardwoods and sustain loblolly pine. To reduce squirrel fatalities, it airs radio warnings to drivers and mows roadside grass to a safe height. It provides nesting boxes and monitors population trends on three refuge sites via trapping, tagging and, increasingly, field cameras. The work has paid off. The three sites’ population estimates grew from 144 in 2001 to 226 in 2010, and, as the squirrels have expanded into other woodlands, distribution has widened substantially.

Blackwater Refuge still does its part for the squirrel, too. “In addition to managing and protecting habitat, Blackwater serves as a laboratory to aide in the species’ recovery,” says wildlife biologist Matt Whitbeck. “We work closely with the recovery team to guide monitoring efforts on the refuge and to provide locations for research on the species.” A breeding population also thrives at Delaware’s Prime Hook Refuge, where the squirrel was reintroduced in 1986.

Since the 1967 Endangered Species Preservation Act listing, the squirrel’s range has increased from four counties to 10. The current population of 20,000 covers 28 percent of the Delmarva Peninsula.

“National wildlife refuges have a unique role in the recovery of the Delmarva fox squirrel, including the support and protection of new populations and providing areas where we can learn more about this fascinating animal,” says Cherry Keller, the U.S. Fish and Wildlife Service recovery lead for the species. “Our state partners and private landowners are also major partners in its recovery as most of its distribution is on privately owned farms and woodlands. But only on refuges do we have staff that will dedicate their time and effort to the monitoring, research and management for this species.”

Tylar Greene is a public affairs specialist in the Northeast Region office in Hadley, MA.

(This story was originally published in the January/Feburary 2013 issue of Refuge Update.)