How do dogs help penguins? 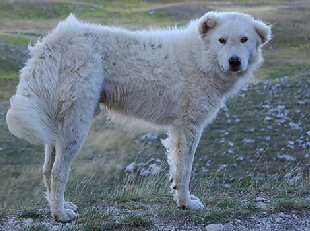 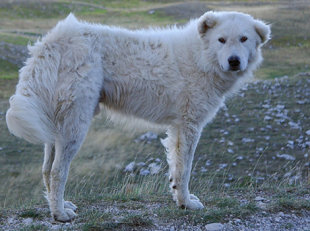 A sheepdog can help protect penguinsIn 2005, the Little Penguin population of Australia’s Middle Island dropped to fewer than 10 birds. When volunteers began keeping records in the 1990s, more than 700 penguins lived there.

Faced with the possibility of losing the colony entirely, the Warrnambool City Council knew something had to be done, but they faced numerous challenges.

At low tide, the small rocky island, which is situated just a few hundred feet from the mainland, is easily accessibly by trampling tourists and hungry predators – namely, the European red fox, an introduced species. A boardwalk was built to keep people off the rookery and efforts were made to shoot and poison the foxes, but the penguins continued to die.

Then David Williams, an environmental science student who worked part-time at a free-range egg farm approached the city council with a proposal. He suggested placing Maremma sheepdogs – the same dogs his employer used to protect chickens – on Middle Island.

Maremmas have been used in Italy to protect sheep from predators and thieves for centuries. Unlike herding breeds that nip and chase flock, these dogs bond with the animals they protect and integrate with the herd, making them ideal guardians.

The city council agreed to a four-week trial to test Williams’ idea, and a Maremma named Oddball – an experienced chicken protector – was selected for penguin duty. Seven years later, the experiment continues.

The project has had its downsides – the first couple of dogs ran home at low tide and a few penguins died of internal bleeding from roughhousing puppies – but the Middle Island Maremma Project has been a success. Since its implementation in 2005, penguin numbers are back in the hundreds.

Today, Middle Island is home to not only many pairs of happy feet, but also two Maremma sheepdogs known as Eudy and Tula, whose names come from the technical name for Little Penguins, Eudyptula minor. The dogs bonded with the penguin colony as puppies and now identify the birds as members of their pack.

Birds of a feather
Inspired by the success of the Middle Island Maremma Project, Williams went on to supervise a similar program in Portland, Australia.

Williams trained two Maremma sheepdogs, Elma and Reamma, to protect the country’s only mainland breeding colony of Australasian gannets. Although the large seabirds aren’t endangered, they produce just one chick a year and their preservation is important to the tourism industry.

There were difficulties at first when Elma and Reamma discovered that Australasian gannet eggs made for a yummy snack, but an old farmers’ trick – filling eggs with pepper – taught the dogs a lesson.

Drawing on the success of the Middle Island project, the puppies were taught at a very young age that the birds and chicks were part of the pack and that the area was their territory. Today, Elma and Reamma have free reign of the colony and are successfully protecting the birds from predators.

Sniffing out poachers
Deep in the wilderness of South Africa, dogs are working to protect another threatened species: rhinos. The animals rebounded from the brink of extinction in the last century, but the war on rhinos is being waged again, and on average, a rhinoceros is killed every 18 hours in South Africa. Armed with weapons and technology, park rangers are fighting back, and many are serving alongside man’s best friend

With heavily armed poachers roaming the parks, trained dogs provide early warnings and safety barriers for anti-rhino poaching units. The dogs are taught to locate poachers by scent and follow the sound of gunshots and vehicles in poaching hotspots.

“It takes 36 hours before a person’s smell disappears from a scene,” said a Pilanesberg Nature Reserve ranger who works with a Belgian shepherd dog named Russell. “When we hear gunshots or suspect that there are poachers in the reserve, Russell will track them down easily.”

In addition to tracking down poachers, the dogs are also taught to locate wounded rhinos and stashed weapons, and they distract poachers and defend their handlers.

“While the poachers cut the horn on the downed rhino the rest of the group lays an ambush in case the field rangers come upon them. This is where the value of a well-trained dog is immeasurable,” says David Powrie, operations manager at the Sabi Sands Game Reserve in South Africa.

“In situations where there is contact, the dog can go forward and distract the poachers giving the field rangers an advantage. The early warning and scent-tracking ability of the dogs give us an edge at night, which is mostly when poachers are active in the field,” he said.

Although anti-poaching dogs are involved in dangerous work, the dogs’ safety is of the utmost importance. Handlers develop close relationships with their canine sidekicks and are taught when it’s safe to send their dogs into the field.