Should the general public be allowed to rehab? 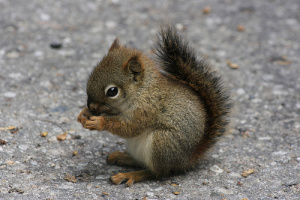 Drop the squirrel and back away…..

Posted on February 21, 2014by suziegilbert Aww, look, a baby squirrel! He’s all alone, and he’s so cute! Why don’t we take him home and raise him, then we can let him go when the kids go back to school in the fall?

The state of Indiana is currently soliciting comments for a bill which would make the above scenario legal, creating an uproar among those licensed to care for injured and orphaned wildlife.

Wildlife rehabilitators have to jump through hoops to get our licenses. I live in New York, where in order to rehab mammals, reptiles, amphibians, and non-native birds (starlings, house sparrows, pigeons) you have to pass a test covering the natural history of all local species, as well as their emergency care, nutrition, restraint techniques, wound management, parasitic infections, epizootic/zoonotic diseases, and release criteria.

In other words, even if you only want to take care of squirrels, you still have to know everything about turtles. Are we tired yet?

If you want to rehab migratory birds, the hoops triple. After passing the state test you have to write an autobiographical summary of your avian experience, including the length of your apprenticeship with a licensed rehabilitator. You have to submit diagrams and photographs of your facilities, specify where you will be obtaining species-specific food, and gather what seem like thousands of letters of recommendation.

Indiana has proposed a bill which would allow the public to bypass all this and wing it for 90 days, which is when the finders would have to hand whatever unfortunate creature they’ve taken in – if it were still alive – to someone with a license, or else simply take it to the nearest field and give it the boot.

So far this would apply only to mammals, but it’s a slippery slope. And if it were to become law, other states could follow.

Every rehabber has horror stories about the birds/animals they’ve received from John Q. Public after he’s kept them for awhile. The fledgling hawk fed nothing but hamburger, whose bones are so brittle from lack of calcium they break when she tries to stand; the young deer who just loves the whole family, including the dog, but who has now started jumping over the backyard fence and roaming the neighborhood; the baby raccoon who has been sleeping with the kids but is now sort of sick, so can somebody fix her and give her back to us, please?

In each case, the finders receive their warm fuzzies at the cost of the animal’s life. Metabolic Bone Disease is normally irreversible; and if the hawk can’t stand, she certainly can’t fly. The imprinted, soon-to-be-hormonal deer has no idea he’s a deer, or that most humans and large dogs are not so friendly. The raccoon – as the parents are always horrified to learn – might have rabies, so she has to be euthanized and tested.

Moral of the stories: get thee (and thy critter) to a rehabber.

Many adults credit their love of wildlife to childhoods spent disappearing into the woods and returning with all kinds of injured/orphaned wild things, even though the wild things usually went belly up within a few days. A generation ago, however, both wildlife rehabilitation and regulation were in their infancy. Knowledge (and the ability to share it) has made a quantum leap. Wildlife rehabilitators are no longer isolated, well-meaning individuals doing the best they can out of their garage; we’re professionals who work closely with skilled veterinarians, share our hard-won expertise with each other over the internet, and on occasion, take credit for helping to restore an endangered species. We know our limits (and how to feed nestling pigeons so they don’t up like this). Shouldn’t the public?

“We in Indiana have all worked hard to help the public see us as a resource, and work with us to improve the situation for wildlife,” says Patti Reynolds, President of the Indiana Raptor Center. “We don’t need our hard work undone by ignorance and pie-in-the-sky laws.”

So what do you do if your six-year-old finds a baby bunny, and she can’t bear to part with it? Or what if it happens to you, and you’re forty-five?

Six is not too early, and forty-five is not too late, to learn that you can’t always get what you want. (I want a 1972 Ferrari 246GTS, but odds are I’m not going to get one.) Explanations are simple: only a mother rabbit or a highly trained rehabilitator has a chance of raising and releasing a healthy wild bunny. And just like humans, if a wild animal is injured it needs to be treated by a licensed medical person, not a well-intentioned accountant, plumber, or six year old child.

But then, how do you get your wildlife fix?

Rehabbers always need help. If you fall in love with the bird you’ve rescued, deliver him to a rehabber and ask if you can volunteer. Work. Learn. With luck, you might get to see your bird released back to the sky, instead of spending his shortened life in a box in your bathroom, improperly fed and in pain. Bring your child to fundraisers, to sanctuaries, to demonstrations with trained education animals like Xena, above. Teach your child to do the right thing even if it makes her a little sad, because help without knowledge is no help at all. “Trust me,” says Kathy Uhler, co-founder of the Pocono Wildlife Rehabilitation and Education Center in Stroudsburg, PA. “I know nothing about kids. If I found a child wandering around the mall and tried to take him home and care for him, I’d release him in much worse shape than I found him.”